Agashi is one of the oldest of township of the East Indian Community. Agashi Church and the interior of the Church.

The village of Agashi, with its proximity to the sea, had acquired a reputation as a timber business and a ship building yard as Sopar, in medieval times was a famous port and training center on the west coast of India (Catholic Directory of Bombay). Around 1568 evidence indicates that two churches existed about 16 kilometers north of Bassein fort. One was called “out Lady of the light” under the Franciscans and the other “St. James” under the secular clergy.

The village of Agashi however, probably because of its location, was the target of frequent attacks and invasions by the Marathas, the moghuls and the Arabs. The Marathas destroyed both churches presumable in the 1739 attack on Bassein.

St. James, it would appear was rebuilt “soon after” (humbert 1:144) by the secular clergy who were permitted to remain by the Marathas who it would appear, did not object to the practice of Christianity. In 1900 Fr. Jovito V Dias, extended and renovated the church, “to its present appearance” with the help of the parishioners. Education came to Agashi in 1938 in the form of an English Medium Primary School called the “holy Martyrs”, indicating that the tradition of the Boy Martyrs (info. below), who gave their lives rather than renouncing their faith in favor of Islam, was still alive. In 1968 St. James Marathi School was opened. St. James High School was built and inaugurated in 1977. 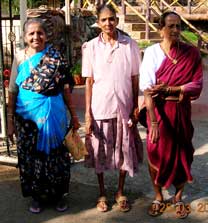 It is one of the fast disappearing sights of the traditional day to day East Indian living.

Depicted in the above photo, is the choices of change, over from traditional lugra to saree to modern day western outfits, slowly eroding our cultural ethos.

In 1540 there was a Mohammedan invasion of Bassein states Dr. Gerson Da Cunha in his Antiquities of Bassein, published in 1876: “On their march homewards the Mohammedans plundered the orphanage of Agashi and it was here the Franciscan chronicles tell us that a batch of Christian martyrs was made, consisting entirely of native converts. The inmates of the orphanage hearing of the approach of the enemy fled precipitately away to seek shelter within the walls the Fort of Bassein. Thus many pious boys were saved, but five persons somehow remained behind either through illness or old age. The Mohammedans on taking possession of the almost deserted college with the five tenants tried all means in their power, first by persuasion and failing in this by cruel tortures, to force them to become converts to their own faith. The Christians resisted unflinchingly both the temptations of safety of life and of high prizes held out to them, preferring to suffer all torments rather than change their creed. The consequence was that they were all shut up in a room of the orphanage and the building was set on fire. The poor Christians perished roasted in the lurid flames of the orphanage and thus gained the glorious palm of martyrdom.”

Bassein ought to cherish the memory of these martyrs as of priceless value and commemorate them in some outward tangible form, for instance, by the erection of a cross with a suitable tablet on the site of the martyrdom. It would be of surpassing interest to know if there is any further information in the parochial archives or local tradition or Franciscan annals. A discovery something like that of St. Gonsalo Garcia could perhaps be made.