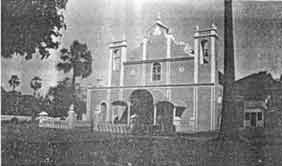 Gorai which lies between Utan and Manori on the western coast, is a seaside picnicker’s paradise. It has beautiful beaches and a profusion of coconut palms.

The Fanciscans built the first church at Gorai in the late 16th Century between 1595-1602 (meersman 1971:204). This church was situated near the Vairala Talao. The Church suffered complete destruction at the beginning of the 17th century, The ruins of which are still visible but concealed by trees and entangling vines. This church was located about three quarters of a mile north of the present church. However, Fr. Paulo da Trinidade reports that the Gorai parish comprised of three villages of Gorai, Manori and Utan and had a catholic population of 720 adults and 120 children.

The new parish was created after the parish church was rebuilt in 1810 (Hull 1:10) About alf and hour boat ride of Gorai is a very small uninhabited island called "St. Anthony's island" by locals. Rumours are that this island is infested with ghost hence no one ventures here in isolation, nor do they stay overnight. there is no vegetation and the land is rocky. in days gone by this alledgely used to be the hiding place for smugglers. The fisherfolk do come occasionally here to pray at the cross and visit here on St. Anthony's Feast day. There is a small cememted block (seen extreme right of pic) on it is the words "Union of India".

The locals of Gorai, who are manily East Indians are fighting for their lives and livelihood, indirectly the survival of East Indian Culture. The ruthless Govement policy of forcible land acquisition, brought down from british era, under a new guise, is forcing the locals to move to another location for the entertainment of others. The first of such was done earlier to give land to Essel World at a rate so cheap, that it was literally free, on tops of that was sops and tax breaks. This was as a promise to give locals jobs, build up schools and colleges, nothing of this was ever done. To make matters worse, the government accepted the proposal of the same group to build SEZ on Gorai and it's neighbouring villages, displacing the original inhabitants to a distant and unfamilier land, without an iota of thought for their livelihood and future generations. The locals have fought this very bravely, they have been untited in their quest and not succumed to the vile design of the politicos and greed corporates.