Juhu, today is one of the most important places in Bombay. There are very few who do not know Juhu, and score of visitors to Bombay always pay a visit to Juhu.

Most of the aged people remember the time when Juhu was a remote area cut off from the main island of Salsette by a creek. At high tide Juhu was a island on its own. There used to be no connection from Juhu except from the Santa Cruz side and through the current Juhu-Vile Parle Aerodrome during the low tide. This is the reason form cross on both the end of this aerodrome pathway, one near Palm Grove and the other side of the Petrol Pump on S.V. Road. The cross on the side of S.V. Road was moved beside the road  by the BMC in 2005, inspite of the fact that the cross had most right of being there (in middle of the road) than most, as it being in that location predates records itself.

It is a possibility that the East Indians of Juhu, were originally from Marol, who moved during a major epidemic centuries ago, however this view is not shared by many since it dates to much back in time. For that matter, there used to be another village, located more further in the sea, about 150-200 meters from the present Hotel Holiday Inn. The remains of few walls including the well used to be seen prior to the reclamation to the sea. In those days the sea used to be that far inside, one had to walk at least 10 minutes to reach the sea water. In spite of the local East Indian Leaders bringing this to the notice of the Government authorities, it was totally dismissed as such were considered as impediments to the progress of Bombay.

Juhu consisted of three main villages Kandal, Agarwad and Sutarwad. Their fibre of being East Indians is very much alive today, and they are proud of it. It is one of the very few places in Bombay, who have kept up their right as being originals through their unity in the depiction of their culture and cultural values.

One of the most beautiful cultural activity that is carried out religiously, is the passo and the singing of the "Marathi Puran" during Lent. And on Good Friday the procession of Christ in the Palki Followed by the Palki of "Dukhi Mauli" carried by the women.

The piety that this is carried on, is note worthy. Even though this procession goes through the market place, one of the busiest places having perpetual traffic, the Locals have impressed upon the local authorities and the Police of this ancient cultural ritual. What is more marvelous is the cooperation of the Police, Local Authorities, Local Shops and Establishment. It seems that everything has come to a halt for this procession. It is a local belief that anyone who seeks blessings by going under the palki, it will be granted. The rush of the people is tremendous, irrespective of religion, caste, creed. The ushers and the members of the Confraternity make sure that those elderly and ailing are taken care off, by stopping the Palki and assisting such people. 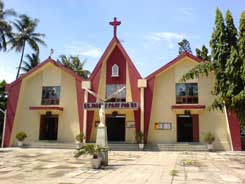 One of the very few East Indian ladies who wear the "vol" is seen here at Juhu, Mrs. Daisy Pereira 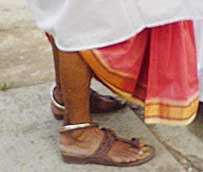 Also Mrs. Daisy Pereira's East Indian "vala". A "vala" is a thick anklet made of silver