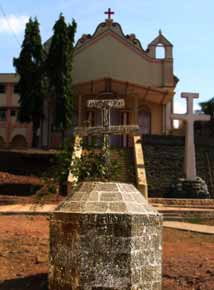 This church stands on a hillock at the northern point of Salsette Island alongside the Western Express Highway. There were the two old villages of Kashi (Cassi) and Mira (Mirem) and this church stood in between the two villages as a dividing boundary line. The pictures shows the present church, which is the third one, built on the same site in 1926 where it was blessed and opened for public worship on 26th December 1926 which even today is celebrated as the feast day though the feast of St. Jerome falls in September.

It was the Portuguese Franciscan Fathers who selected this site between two villages and built their first church in 1595. This was a beautifully worked upon wooden structure by the local carpenters under the directions of the Franciscan Fathers. This building lasted just 23 years for it was destroyed in a terrible cyclone that hit the western coast in October 1618.

It was not until 1628 that the new church was built alongside the ruins of the old. By 1630 as Fr. Paulo da Trindade tell us, the parish was flourishing and now consisted of villages of Kashi, Mira, Sanbojapal, CHene, Bandonli, Baroli and Tantoli. This church flourished for the next 109 years and it was destroyed in 1739 during the Maratha invasion.