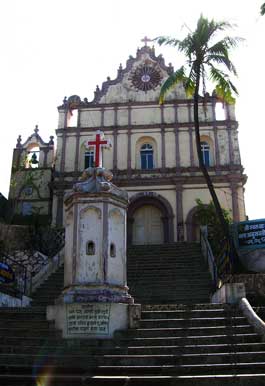 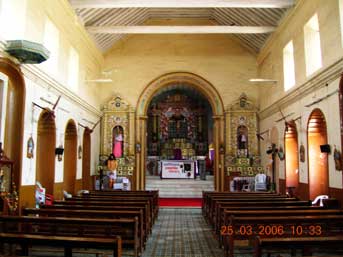 Nirmal is few of the places where the entire East Indian Community should gather regularly, for this is one of the places that indisputably proves our existence at the time of the Portuguese, if not before.

The Church altar beautifully painted in gold like most of the old Portuguese Churches.

The insignia on the top of the church. The Marble stone on the Bell Tower stating "This Church was built by the Portuguese in 1580. Destroyed during Portuguese Maratha war in 1739. Rebuilt by the Parishioners in 1856, at the cost of Rs. 20,000 and physical labour. From 1739 to 1856 the present Cemetery was pro tempore their Church."

Church of the Holy Trinity (Gomesali)

Gomes Ali Parisar, consisting a cluster if five villages of Chowkala, Gomes Ali, Vanda, Rambai and Darseng, was an integral part of the parish of Holy Cross Church, Nirmal till June 5, 2004 when His Lordship Bishop Thomas Dabre ereced it as separate new parish dedicated to the Most Holy Trinity.

The following could be cited as milestones in the history of this newborn parish.

Sept 2, 1979 Fr. Edwin Colaco, the then Vicar of Nirmal (now, Bishop of Amravati) offered first Sunday Mass for this section. Originally the place chosen was the Primary Local Board School Building of Chowkala. Fr. Rasquinha the next parish priest of Nirmal continued to encourage the leaders of this area to raise funds for the development of the area. Fr. Micheal D’Soouza and Fr. Domnic Pereira, the next two Vicars at Nirmal accelerated the effort to secure land ( a major portion of the land was donated by some farmers of this area and the rest was bought from time to time) for the Mass Centre and to start a small multi purpose stage in 1991 which was regularly used to offer Sunday Mass.

On January 31, 1992 the Don Bosco Sisters arrived on the scene and started staying wih the people, thus strengthening the solidarity of this section as one community of believers. In April 2000 Fr. Vivian Rebello, a Dominican Priest was appointed in-charge of this section. Fr. William Ferreira and Fr. Wilson Rebello too contributed their mite in keeping the momentum going.

Fr. Elias Rodrigues, the architect of this new parish, visited this area on June 16, 2001, in his capacity as the newly appointed Parish Priest of Nirmal Parish and under his charismatic leadership a committee of 72 servant-leaders was formed with a firm determination to compete the task that his predecessors had begun. On Dec 2, 2001 Bishop Thomas Dabre, who gave every encouragement and support, blessed the foundation stone of th enew church building within a brief span of merely six months, both the church and th eParochial House were inaugurated and blessed on the feast of the Most Holy Trinity, Sunday May25, 2002 ! the people in the vicinity regarded this as a mighty work of the Almighty Trinity !!

The Church was given autonomous status of a canonical parish on Jue 5, 2004 when Fr. Johnson Menezes was appointed its first Parish Priest. Today it shines as a small, beautiful and vibrant parish in the diocese of Vasai !