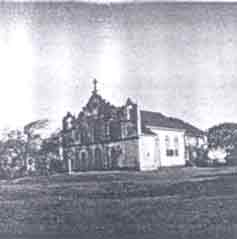 Antique Photo of the church

Antique photo of the Sahar Village, what can clearly been seen is the "tank pakadi" with all its surroundings. the water which can be seen in the forground, is the water collected during the rains, whose outlets went into the fields. In these fields mostly vegetables were harvested. This is before the time the field were taken away by the government.

Initially the was no proper road acess to the Church. It was the intitative of the local East Indian School Boys and Girls that the road was built.

Prior to 1846 when Fr. Mathew Salvador Rodrigues, a native of the village of Sahar, built a chapel, there existed near the same site a Portuguese Chapel that stood in ruins since 1615 AD.

The Catholics of Sahar and neighbouring Bamanwada continued to belong to the parish of Koli Kalyan (Kalina) until 1904. Since Kalina is quite a distance from these villages, the old people found it difficult to travel there and hence Fr. Mathew S. Rodrigues built a chapel for them.

In July 1980, the old chapel was demolished and a new church was built under the administration of Fr. Joseph Coutinho as Vicar. The foundation stone of the new church as laid by Bishop Longinis Pereira and on the building’s completion, was blessed by Archbishop Simon Pimenta on February 8, 1981

(taken from the Archives of the East Indian Association Silver Jubliee)

The progressive little village of Sahar is situated on the plains of Central Salsette about one and a half miles east of Vile Parle. The hills of Chakala and Bamanwada on the west command a picturesque and diversified woodland scenery and present a bird’s eye view of Juhu and the surrounding villages. It is skirted by the backwaters of the Bandra Creek and the Vihar River on the east. Its total population is 1,000 most of them being East Indians.

With the exception of the few who are employed in Bombay firms and railways, the larger number of the population is engaged in agricultural pursuits. Sahar is famous for its brinjals, cucumbers, lady-fingers and other green vegetables.

Formerly it formed a part of the parish of Kolhe Kalyan. A Chapel was built in the year 1846, mostly through the benefaction of late Rev. Fr. Mathew Rodrigues a villager of Sahar. It was created a separate parish in 1904 when the present Church was built through the efforts of Rev. Fr. Sequiera and the villagers.

There was no regular school in existence up to the year 1926.  The Master of the Hounds, The Bombay Jackal Club, Mr. Kirke Smith who used to hunt round the country near Sahar, handed over to the villagers a sum of Rs. 50 to be utilized towards the Village School. He little knew that no school existed at Sahar.  This donation was an inspiration to the villagers to found a school. The N.M.Wadia Charities contributed another Rs.50. A Local Committee with Mr. J.H.Katrak, Manager of Kurla Estate, as President and Mr. H.Joseph P. Creado as Hon. Secretary was formed. And thus the School housed in the Church premises which fortunately had sufficient accommodation, was started with one teacher in charge of 30 pupils. The Kurla Estate through Mr. J.H. Katrak were persuaded to give an annual grant of Rs. 15 besides a donation of Rs. 200.

With the arrival of the Rev. G.L. Pais at Sahar in the year 1927, the School received the much-needed stimulus and was re-organized and placed on a sounder basis under his personal guidance.

The following year it had 51 children on the rolls, was recognized by the School Board, Bombay Suburban District and granted and annual grant-in-aid.

Today it has 90 children on the rolls. It imparts instruction upto the III Standard in English, Marathi being the vernacular is taught in the School. A qualified staff including one headmaster and two lady teachers is in charge of the School.

The present Committee consists of the following: Mr. J.H.Katrak, President – Mr. Joseph Creado, Secretary – Messrs F.D.Santos, J.F.Gonsalves and B. Brako, Members – Messrs A. Santos and L.M.Fernandes are Auditors. An appeal has been issued for funds for the new school building and amounts are being collected.

Sahar and the International Airport of Bombay

Most of the region in and around Sahar was fields, during the British rule, at the time of the World War 2, the british forcibly acquired the lands of the villagers for what has been documented as "war purposes" and made the commitment to give back the land post the war in good condition. Also if the condition of the land was in any way "deteriorated", this would be compensated for. Very shortly after the World War 2 ended, we (Indians) got Independence. However, based on the terms of indipendence all land & porperties in the possession of British were to be handed over to the Indian Govenment, with past treaties to be honoured. However, for the East Indians whoose lands were taken, they had to go to Delhi, to plead their case, and who-so-evers land was not it use, was leased back to them (the owners), with a commitment to review and release the land. However, all of these were never done, no owner was compensated the prevailing rates. Today in 2009, the land aquisition has reared it's ugly head, and the Government has asked the villages of Sahar (including the century old church) and Bhamanwada to vacate as they want to expand the airport. The Government is trying to publicize to the world that these original villages are slums and illegal encroachers. it is for the international community, to pressurize the world bank and it's fundings to Governemnts who are trampling over aboriginals, aborginals rights and not protecting the rights of the aboriginal and their Culture.